Democrats and Republicans Battle Over Trade

Previous Next
Democrats and Republicans Battle Over Trade 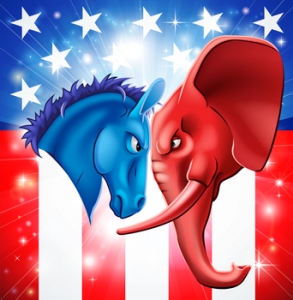 A Gallup survey from March reveals that the nation’s support for foreign trade is at an all-time high. More than half of Americans (58 percent, the highest since Gallup started keeping track) think that international trade offers more opportunity than threat. Gallup experts suggest that support is tied to the strength of the economy. What is surprising, however, is how nationwide trends differ from what is currently happening in Congress.

The poll revealed that, across the country, Democrats are significantly more supportive than Republicans of international trade. This is likely a result of ongoing trends: Republican support has been trending downward since 2005; Democratic support has risen significantly since 2008.

The ongoing drama on Capitol Hill seems to be in contrast to these nationwide trends. While House Democrats have consistently backed President Obama on other issues, they recently rejected his personal appeal to expand trade negotiating power.

The party voted to end assistance to workers displaced by global trade, a program created and supported by Democrats for more than 40 years. “We want a better deal for America’s workers,” said Rep. Nancy Pelosi.

That vote places the Trans-Pacific Partnership in peril. The TPP proposes trade agreement with 11 other nations along the Pacific Ocean and affects 40 percent of the global economy. The decision “hurts America,” according to Republican Rep. Charlie Dent. The defeat is a definite blow to the President, who said:

These kinds of agreements reflect the realities of a 21st-century economy. These kinds of agreements make sure that the global economy’s rules aren’t written by countries like China; they’re written by the United States of America. And to stand in their way is to do nothing but preserve the long-term status quo for American workers and make it even harder for them to succeed.

Trade ministers from other nations have been holding off to see what Congress will do. The venture’s largest partner after the U.S., Japan, declared that it will not make the political concessions President Obama wants if Congress could alter the deal after its signing.

Speaker John Boehner expressed the majority’s concern about the rising power of China. “When America leads, the world is safer, for freedom and for free enterprise, and if we don’t lead, we’re allowing and essentially inviting China to go right on setting the rules of the world economy.”

While the House continues to battle over foreign trade issues, American businesses continue import/export dealings around the world. How Washington’s decisions impact each of these domestic businesses is yet to be seen, but having a trade expert on call can ease some of the uncertainty.

An international trade manager can focus 100 percent on the complexities of foreign trade, enabling U.S. companies to focus on their own businesses. The experts at Walker World Trade, for example, knows what it takes to get a product from China to the U.S., and vice versa. International trade managers know how to deal with cultural and language barriers, foreign product development processes, overseas transit, and customs and duties issues. Relying on trade experts keeps American businesses in compliance and focused on profitability.